Puebla de Don Fadrique is on a major road. Like most towns of this type, the town seems to have expanded around the road, so most of the stores, services and places to stay are not in the old part of town. After staying in a pension near the main road, I headed off towards Almaciles. The GR7/E4 only goes near Almaciles (not through it), but the first 10km of the day followed the two-lane highway that runs between the two towns. While there were some broken bits of frontage road and traffic was relatively light, it was still not nice being on, or near, a major road. However, once the path turned off the road and onto dirt farm roads towards Canada de la Cruz, it was great walking. Nice flowers and views of Canada de la Cruz, and even a sheep herder to liven the atmosphere. The waymarking had improved, and there was also a major milestone in this 8km piece. The GR7/E4 officially left Andalucia and entered Murcia, and there was a stone waymarking to mark the occasion. Stopped for some lunch in Canada de la Cruz before walking another 7km and finding a place to camp under some pines.

Having camped just on the other side of the pass from Canada de la Cruz, the first 10km were downhill. The path followed the same dirt road for quite some time, as it wound through the mountains. At times, the mountains had high rock faces, which eventually intersected the road on which I was walking. It was a bit unnerving walking just beneath those high walls when the road was strewn with rock fall debris. Needless to say, I stopped listening to music during that time. The last 6km into El Sabinar were mostly uphill, as the road pulled out of the rocky valleys below and up onto a high agricultural plain with hills around. Stopped in El Sabinar for the night, a town acting as a service stop for the many farmers and the nearby village of Calar de la Santa. Found a cheap pension room there.

The fairly long 31km stretch from El Sabinar to Moratalla started with some easy farm and paved minor roads, but once I started going through the mountains it began to get interesting. The dirt road instantly turned into one of the rockiest roads I have ever seen. It was literally embedded rocks with loose rocks on top, and there were no flat spots, tire tracks, or shoulders to get around it. It was just punishing my feet, and I could feel the bottoms of my feet bruising. Had to be careful not to turn my ankles, which was next to impossible.

Combining that section of road with two creek crossings, and I was laughing out loud in a “what the heck am I doing here” moment. The road eventually became less rocky and included some really amazing views of the huge rock walls and pine forest. The dirt road gave way to a two-lane paved road that eventually ended up in the middle of Moratalla, after some local traffic dodging. Moratalla is beautiful. Poured into a hillside with a large church and castle looming over the town. From the church, you can look down on the entire town and the valley below. It was definitely one of the better photo spots I’ve seen on the trip so far. I was hoping to stay in Moratalla, but there wasn’t a single hotel/pension in the entire town, which really seems strange given the tourism qualities of the town. I asked quite a few people in town, and not one of them could find a room, or even think of a hotel/pension. There were plenty of houses for rent several kilometers outside of town, but they either do not rent to individuals or they are just too expensive (intended as vacation rentals for families). Ended up going outside of town to camp after grabbing some coffee and a few groceries.

After camping outside of Moratalla, it was a shorter day into Calasparra, where I have a rest day planned for tomorrow. The rest day comes at the right time, as I was feeling very tired and sluggish on the way to Calasparra. In the morning, I had a few nice views of the upcoming valley with its sharp hills and green farms, but the rest of the way was a bit dull. The track weaved through farm roads in the bottom of small valleys between hills, which were fairly worked over by farm equipment. There was not much of a view. Also contributing to the dullness was a dark sky, but rain never came. Calasparra seems to be home to a fair number of British expats, and is famous for its locally grown rice (Arroz Calasparra), made possible by the convergence of several rivers in the area. 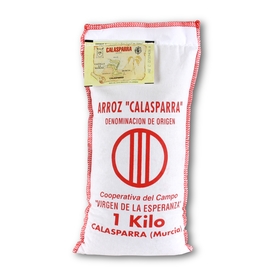 During the rest day, I am planning to attend afternoon mass at the Santuario Virgen de la Esperanza (Sanctuary of Our Lady Virgin of Hope). I’m not a very religious person, but it is a good way to appreciate the significance of this landmark.

On a side note, I was surprised at how quickly the architecture changed once I crossed from Andalucia to Murcia. The all-white buildings have changed to stone or multi-colour. The Iglesia de la Merced church in the center of Calasparra is light blue, for example.