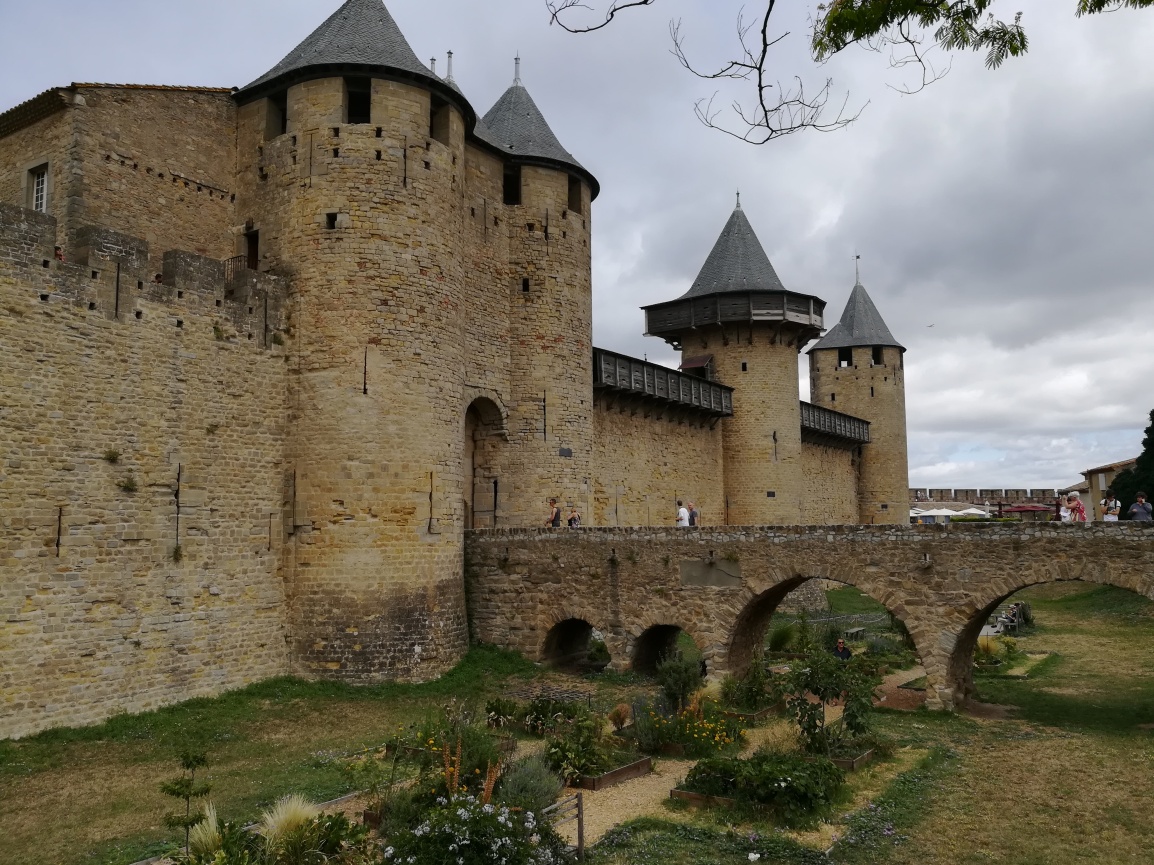 While camping in Termes was fantastic, the night was extremely windy. It was hard to sleep with the tent crashing around, so I was a bit tired the next day.

After a steady climb and descent on trails, I ran into a family from Norway that was hiking around the area, using their holiday house outside of Lagrasse as a base. I walked with them on the dirt roads over to the village of Mayronnes. This stretch of dirt roads is unusual in that it has an art walk, where pieces of art were placed alongside the road. The family stopped for a lunch break in Mayronnes, but I was keen to get to Lagrasse and kept going. I hit the small village of Caunettes en Val a few kilometers from Mayronnes, but not much going on there. No place to stop for a coffee break, so I finished the last 9km into Lagrasse. Arriving in Lagrasse, the tower of the abbey is visible from everywhere. Lagrasse is a beautiful medieval city, built with fortification along the river. The old bridge enters a narrow gap between between the buildings, which was likely guarded at some point.

I toured both the medieval and “newer” parts of the Abbey, which were both outstanding. The gardens near the tower were fantastic.

This was the largest town I had been through in a while, so it was nice to have some tourists around and a choice of restaurants.

The next day I hit the village of Ribaute, which is not far from Lagrasse. At first it appeared to be a bit lifeless until I emerged at the opposite end of town. Like Lagrasse, there was and old bridge with beautiful buildings lining the river. The river was a fantastic swimming spot, and people were arriving to spend the day on the river rocks. 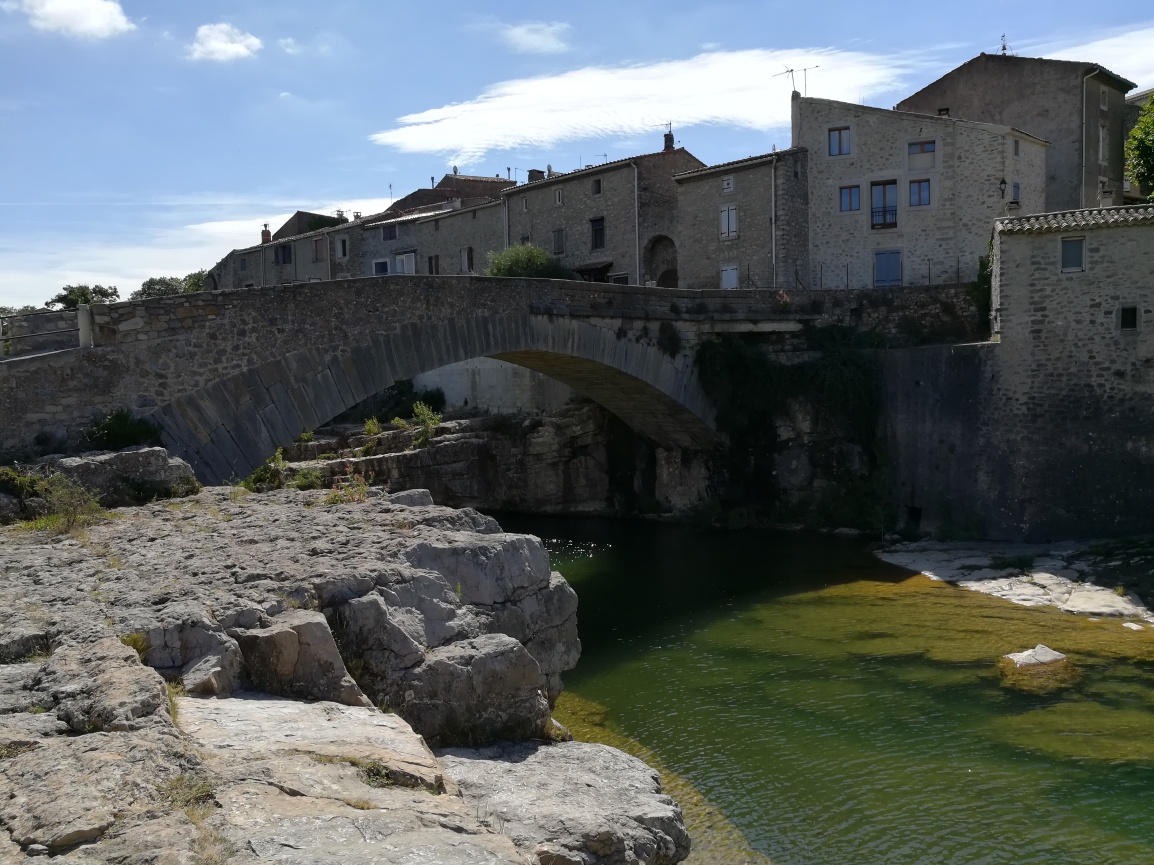 The rest of the day was supposed to follow the hilltops all the way to Monze, but I decided to take a different route that went through the villages of Montlaur and Pradelles en Val for something different. Both of these villages were quiet and there were no open businesses, but it was nice to see them rather than just rocks and hills. There was a little piece of road walking with traffic that wasn’t particularly nice, but still worth the detour. I arrived in Monze, which was nice but very quiet. A few vinyards had their storefronts there, but all were closed. Aside from that, there was really nothing in Monze.

I was still a bit too far away from Carcassonne to get there this day, so I went a kilometers further and camped in a Grove of trees on a hill outside of Monze.

Going into Carcassonne the next day was shorter, but a mixed bag. There were some nice sunflower farms, but much of the rest was navigating around busy roads and suburbs outside of Carcassonne. However, everything changed as I approached the walled old city on the edge of Carcassonne proper. Suddenly there were walls and towers everywhere and, upon turning the corner towards the drawbridge entrance, there was a mass of tourists. While it was the height of tourist season, it was still very interesting to navigate the narrow streets of the very well preserved medieval town. There are not too many medieval towns in Europe that are this well preserved. Aside from the tourist shops, it looked like I had gone back in time. 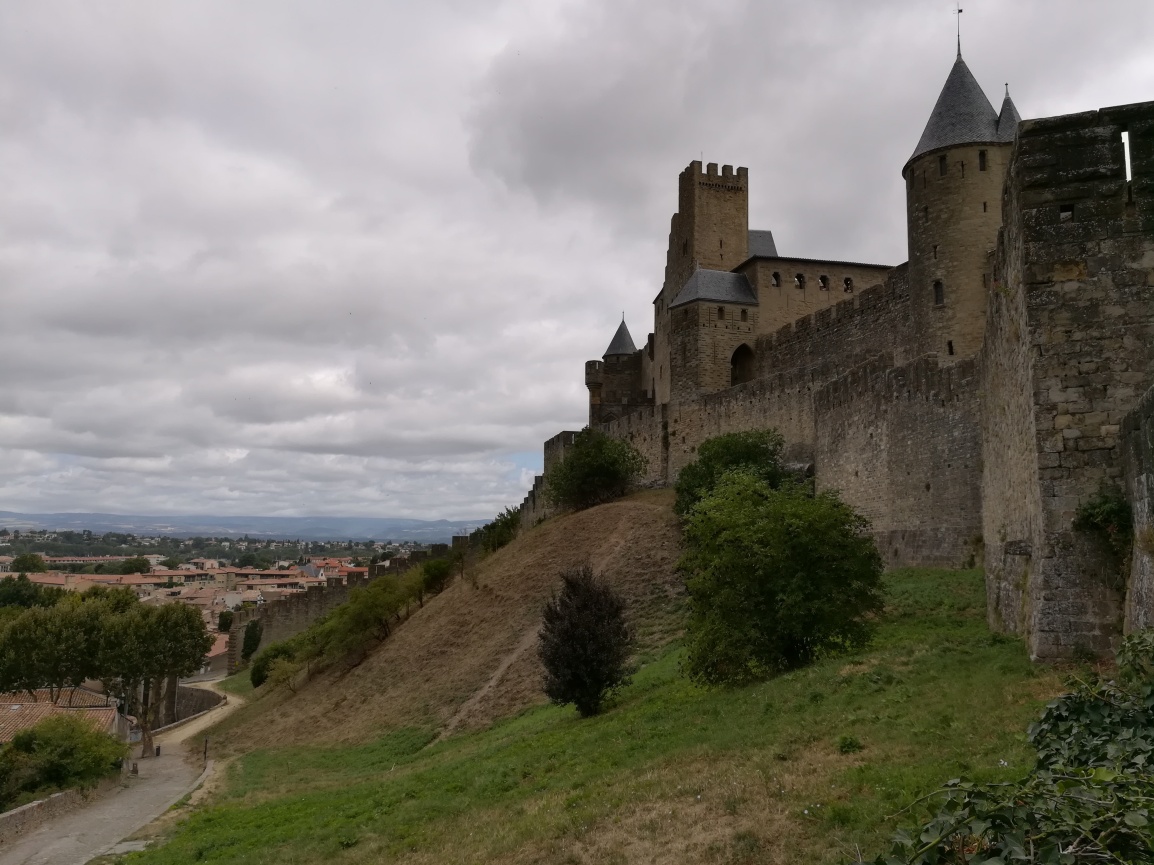 I had to holster my walking polls on my pack while navigating the old city because there were just too many people. After exiting the old city, I went across the river to the other part of Carcassonne and had lunch and coffee in the square. I hadn’t taken a rest day in over ten days, so I was looking forward to the off day ahead. I would have time to explore Carcassonne a bit more.