After a nice Airbnb stay in Rasquera, I wanted to go on through Tivissa and camp somewhere. The first half of the day was a bit underwhelming, following farm roads through the valley, but things started to improve once the road reached the top of the hills on the other side of the valley. There was a great view back towards Rasquera before the road started weaving down through some sawtooth rocks, before arriving at the Ermita de Sant Blai. 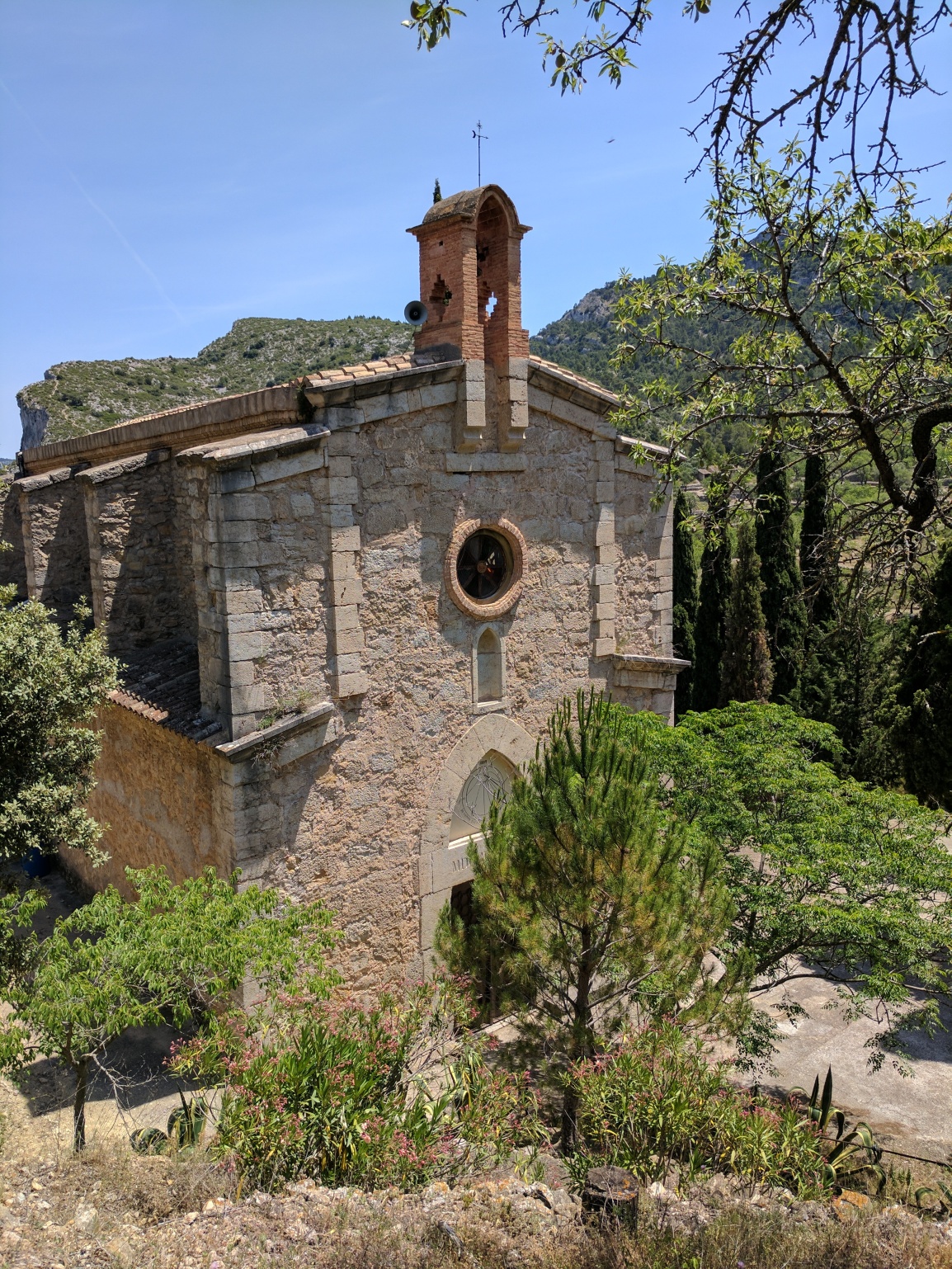 The grounds surrounding the Ermita were very nice, and the signage was great as well. The waymarking and signage has been excellent since arriving in Catalonia. Just after the ermita, the road split a rock spine, and there were two rock climbers that were finishing their day by hiking out. The road made a few final twists into Tivissa. I arrived earlier than anticipated, and I was only looking to walk about an hour or so further before camping, so I found a restaurant and had some good food and coffee. I waited until 5pm for the nearby market to open so that I could buy food for camping. After stocking up with food and water, I continued on. The path went through some cherry orchards, where the trees were still loaded with cherries.

I was tempted to pick some, but that’s not a friendly thing to do. I then followed a series of trails up into the hills. I think that part of the GR7 may have been redirected and I missed the turn. I ended up on a trail that was marked with the GR7 red and white marking, but it was clearly faded and the trail was quite overgrown. I didn’t bother turning back to find the right way, since the piece of trail was not that long. Eventually connecting with a dirt road, I started looking for a campsite. Had trouble finding a flat, open spot that wasn’t super rocky, so I settled for putting my cot on a dry creek bed.

In the morning, I was awoken by a group of local hikers on the road that were out for a day hike. This day was predominantly trail with steep and rocky parts, making it pretty slow. The trails climbed through a narrow pass. Once the other side of the pass, there was a brief stint on road that passed some very nice wineries. Once off the road and back on the trail, it again climbed steadily and passed just beneath a giant cliff face. While impressive, this is always a bit unnerving for me because of the falling rock danger. The trail and area beneath the cliff face was littered with rock fall. Once clear of the cliff faces and the summit for that part of the trail, I arrived in the very small hamlet of Llaberia. This was an interesting hamlet because most of the buildings looked to be period buildings, all old stone. There were some people living in Llaberia, but ir was otherwise very quiet. There was a kid riding his bike in the street, which was the only thing that broke the silence.

After leaving Llaberia, it was a very steep and rocky climb, followed by an even steeper and rockier descent through the Coll de Guix. This descent had me mumbling a bit, as it was not very nice on my feet and ankles and seemed to go on forever. Finally joining the roads leading into my destination of Colldejou, I ran into two day hikers and two geology students that were out for a hike to study some of the rock formations (and my feet can tell you that there are plenty). 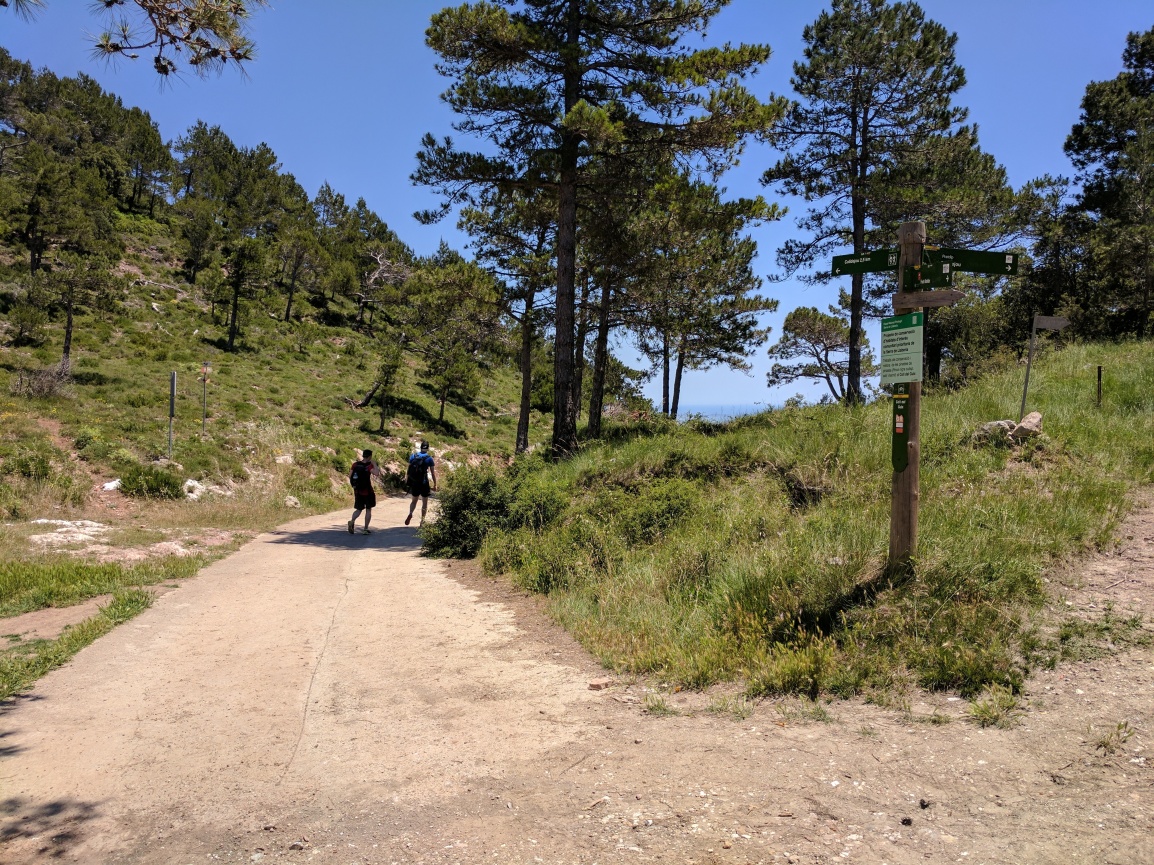 From just above Colldejou I could see the ocean, which was nice given that I had not seen the ocean since leaving Tarifa over two months ago. The village of Colldejou was not very big, but was surrounded by mountains on three sides, which made for some nice views. There were a few tourists that decided to make the short drive in from the coast to see the town and have lunch. They were mostly Spanish, but there were also a couple of French people. I took advantage of the restaurant and ate a ton, because I knew that the following two days would be long and the weather would be rather warm.

The 31km day from Colldejou to Arboli was a bit mixed. The morning hours out of Colldejou were good, with the road rising up to a high ridge covered in wind turbines with views to both the ocean and the interior valleys. From the top, it was a nice but rocky trail down to the roads leading into L’Argentera. I stopped quickly in L’Argentera to get more water and was impressed by the older town center. I was contemplating lunch, but could not find any pubs or restaurants at all and decided to continue on. 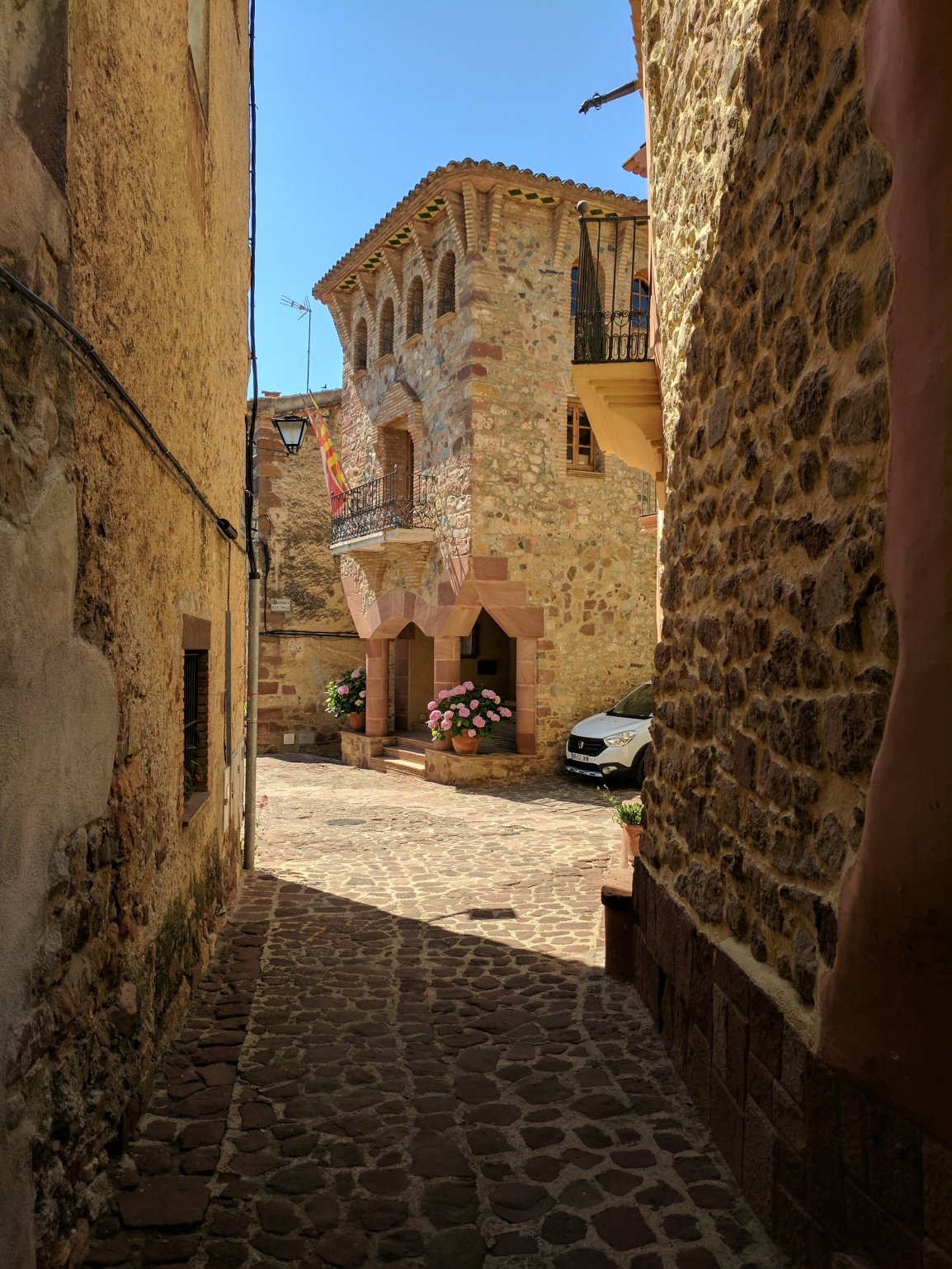 The dirt road was fine until it dropped down to cross the highway and then climbed again into a dry, steep, exposed area with more wind turbines. I also had a weird experience with a random donkey that followed closely behind me for about a kilometer.

I didn’t like this area, and was happy when I finally exited over the mountain. Then the day got better again, with the road leading to a large ermita on top of the hills. From the ermita there were panoramic views towards the ocean, where I could see the upcoming cities of Reus and Tarragona.

The road curved around the ridges of the range and, after some great views of the green valleys, finally arrived in the small village of Arboli. The little store was the only thing open in Arboli, and I hung out a bit to stock up on food before going just outside Arboli to camp. Lately there have been more rough trails, which are slow. It was nice to have a day with mostly dirt roads where I could move more quickly with less foot pain.

I am now only about 50km from Tarragona, which is a big milestone for me.