I got a late start leaving Montanejos, as I wanted to see the Mijares Banos. It is a short section of river near town where the water is crystal blue thanks to the areas thermals. I waded around for a bit, and it felt great on my feet. There was also a beautiful fountain, which everyone was drinking from. 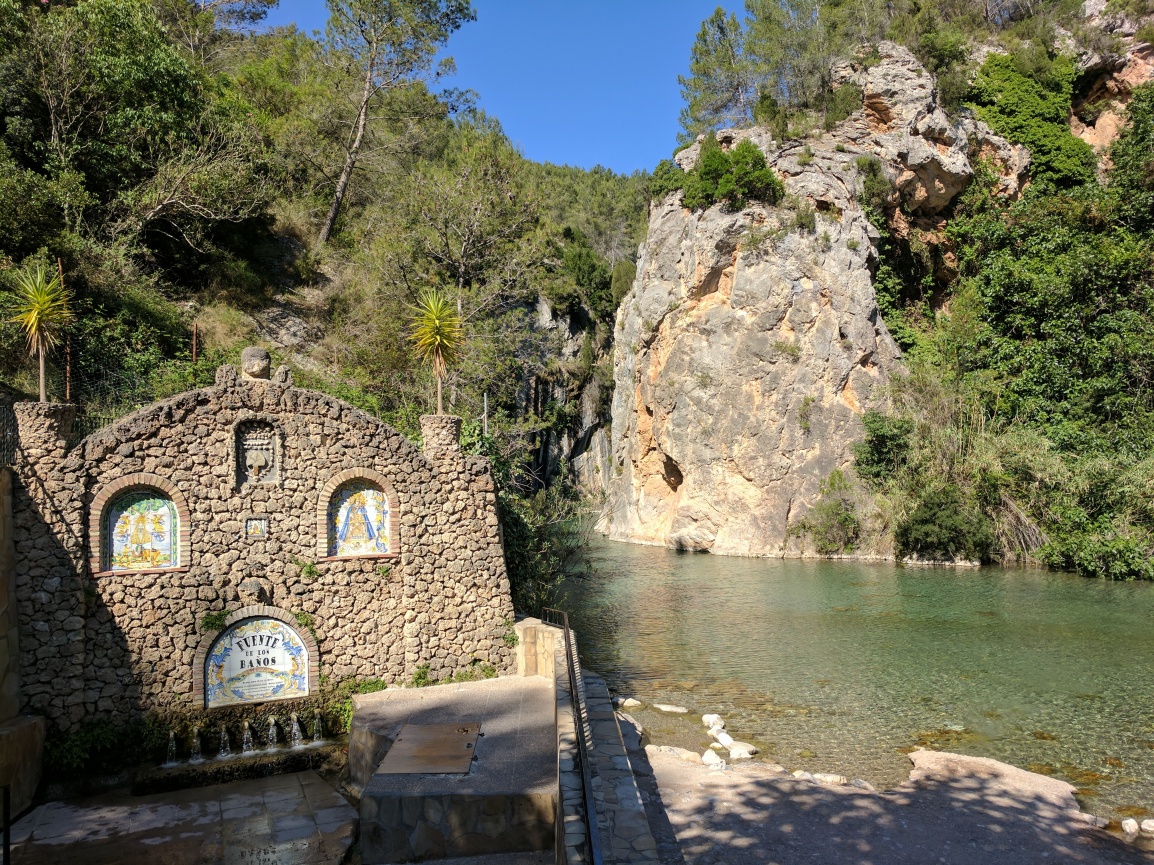 That was a nice morning. Well worth the stop. Once underway, the walk became challenging, starting with the stiff climb out of Montanejos. After the climb, the road gave way to a steep downhill trail that was not in the best of shape. While not as bad as some previous days, it had its share of downed trees, etc. After reaching the dry riverbed at the bottom, I had to follow it for a bit before going up another steep climb to get out of the river valley. Once out of the river valley, there were multiple temporary redirections due to some forestry and maintenance work. Those redirections ended when the path met the main paved road leading to the village of San Vicente de Piedrahita, which was pretty but quiet. After stopping for a quick coffee, it was onwards towards Villahermosa del Rio. Along the way, I passed the Ermita San Bartolome. I could see the stone chapel from a long ways away, as it was taller than the surrounding low hills. Just after passing the Ermita San Bartolome, things started to fall apart a bit. I had been successfully dodging thunderstorms for the past several days, but was not so lucky this day. I got caught in a pretty significant thunderstorm, with lightning, hail, and aggressive downpours about 6km outside of Villahermosa del Rio. It soaked my shoes and socks, and made the road an instant mud hole. The final descent into Villahermosa del Rio was quite rocky, and my soaked feet started to hurt. Luckily I didn’t really do any further damage to my feet, but it was not a fun time. Thankfully, the thunderstorm passed as I arrived in Villahermosa del Rio, so I explored a bit. It’s a beautiful town that is draped into the saddle of two hills, and it has a huge square for a town of that size. It was nice to explore, but very quiet.
The day from Villahermosa del Rio to Vistabella del Maestrat was unusual in that most of the day was on single-track trail. This had not yet happened on my trip. I was a bit weary given some of the trail conditions up to this point, but it turned out to be fine. After the trail followed the river canyon and made several crossings, it got very steep as it climbed all the way from the bottom of the canyon to one of the highest points in the area. The climb passed some nice old farm houses and terrace farms, but I was really begging for a break after that climb. I did slip and fall during this section, which was the first time that I fell during my trip (amazingly).  When I fell, I landed on my hand, which scratched up my palm and broke my fingernail. Luckily, my nail was not broken in a way that was too painful. Could have been worse. Now that my shoes are fairly worn out, the lack of tread is causing me to slip more. After finally reaching the top, the trail turned into a road that entered the Parc Natural de Penyagolosa, which is another excellent park managed by the Valencia government. Shortly after entering the park, I arrived at the Ermita Sant Joan, which had amazing grounds and was a lovely place for a lunch break. Accessible by road, there were several cars with people either visiting the ermita or taking day hikes.

I don’t always take lunch breaks, but needed one to recharge after that climb. The path then continued through the park grounds, with campsites and other nice amenities, before turning to a rocky trail through the forest. I then exited the forest onto a very straight and flat farm road that cut across​ the valley before terminating at a paved road just outside of Vistabella del Maestrat. One last 2km section of trail took me over the hill and into town. It’s quite a nice town, and I hung out awhile for food, groceries, pharmacy (foot tape), and water. There were no hotels/hostels/etc in Vistabella del Maestrat, only some casas rural for rent. I called around, but they were either too expensive, did not rent to solo travellers, or they were already booked. I decided to go about 2km past the town and camp. It is quite rocky in this area, so it took a bit of hunting to find a good spot. I had to set up the tent, as there was a chance of thunderstorms during the night that prevented me from doing a cot-only camp.

While camping outside of Vistabella del Maestrat, it rained a bit at night and then the heavy thunderstorms arrived in the morning. There was a lot of lightning, and I had to wait for the storms to pass before heading on. The path followed a dirt road that curved in and out of the recesses in the hillside. This piece had amazing scenery, with farmhouses clinging to the edges of steep slopes and the green terrace farms making a fingerprint-like pattern as they follow the contours. After following the road for some time, it changed to a trail that darted off of the road and down to an abandoned farm house on a grassy knoll, before continuing the steady drop to the dry river far below. After taking a quick lunch break at the riverbed, it was time to tackle the big climb up the other side. I was only about a quarter of the way up when another thunderstorm arrived. I ran to the nearest tree and put on the poncho.

The poncho is a great lightweight rain solution, however it has one big drawback. When climbing, if you are someone that gets hot and sweaty, the poncho does not breathe well, leaving a lot of condensation inside the poncho. I found that when I have a big climb while wearing the poncho, I am soaking wet after taking it off. While I get soaking wet, the pack stays dry, which is the main goal anyway.

Once the climb was complete, the path turned to a dirt road that entered a very dramatic and rocky canyon, with the centerpiece being the rear of the castle in the village of Culla.

The road wrapped around to the village side, and I stopped for a quick tour of the old walled city at the top of the hill and a tour of a coffee cup in a bar near the square. I continued on the section to Benasal, which, aside from the nice views looking back on Culla, was a bit dull. The road went down through the valley before connecting to old rock paths that were walled on both sides by stone farm walls. It then headed up a hill before dropping down into Benasal. Benasal was a nice town, but had few defining features, except for the bullfighting ring that was built into the main square, which was unusual. That night, they had amateur “bullfighting” and a major party in the square. There was a band and a bar, and just about everyone in town was there. Most businesses were closed during this time. The bull was released into the ring, and some keen locals would urge the bull to chase them and dodge the oncoming charge. This was not traditional bullfighting with three acts and a sword, and the bulls were not killed. Not sure if any locals were killed though, as I didn’t stay at the festivities for too long.

The stretch from Banasal to Morella was challenging. It was raining in the morning, which delayed my departure by a half hour. Once I got up in the mountains about 5km out of Benasal, thunderstorms rolled in. There was lightning and very heavy rain. The visibility was so poor that I could only see about 20 meters at best. The trail filled with water and my feet were soaked. It finally got so bad that I had to stop at a restaurant that was about a kilometer or so before Ares del Maestrat. The restaurant building actually scared me, because the visibility was so poor that it just appeared all of sudden out of the rain/clouds when I was right in front of it. I waited at the restaurant for about forty five minutes for the weather to clear. Socks changed and underway again, I quickly wandered around Ares del Maestrat, but had to get going again because I had lost so much time and it was a long day distance wise. A few kilometers out of Ares del Maestrat, the waymarking was confusing, and I followed the waymarking a bit only to discover that the waymarking stopped and the trail evaporated. I couldn’t really tell where to go. I tried one road, even though it was not marked, and eventually found the path, but not after some more time lost. The way out of the mountains was also confusing, with a trail that was not obvious and markings that were only good in places where they didn’t need to be. At all of the critical junctions, the markings were missing, and it took more time to try different ways. After leaving the mountains, the path improved to a dirt road that ran for several kilometers across the valley and the next set of hills. But, the path then deteriorated, going back to unmaintained and questionably marked, at times going through areas where cows had torn it up and it was overgrown with blackberry. This slowed the late part of the day, but I eventually came to edge of the valley overlooking Morella. It looked fantastic, with the towering castle and complete ring of intact city wall. I made my way into the city through one of the wall gates just before it started pouring down rain with lightning again. Thankfully I wasn’t caught in that, but I’ll have to leave exploring until my rest day tomorrow.

One thought on “Montanejos to Morella”