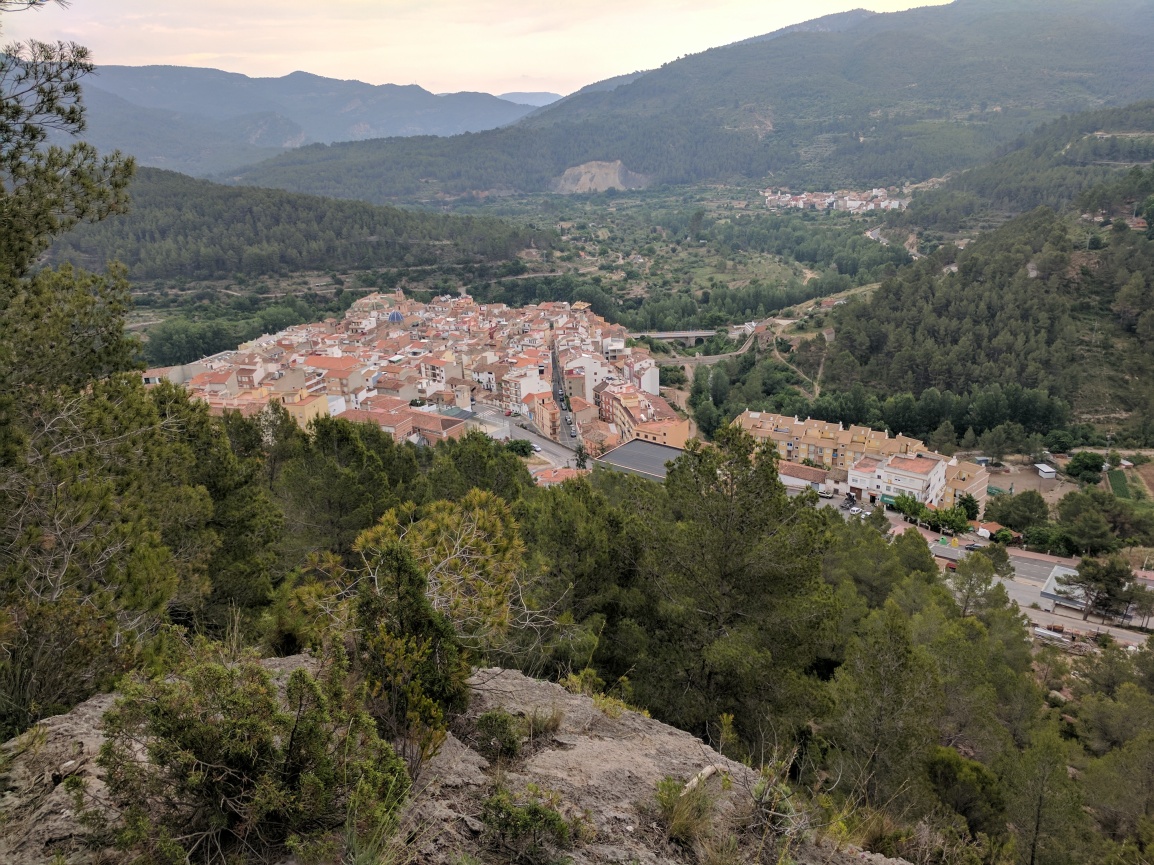 Leaving Chelva, I stopped at the pharmacy to get another roll of tape for my feet, which were still feeling awful. I sat on a park bench and taped my feet before heading off. The dirt roads cut through olive and almond orchards before entering the hills. The GR7 then had a short trail stint along a forested creek before rejoining the road. While the road was generally in good shape, it eventually joined a dry riverbed, which was entirely rocks. However, the riverbed was largely soft, so it wasn’t so bad to walk through.

After the riverbed section, the road followed pine forest for a long time. While nice to walk, it was also unremarkable with few sights. The scenery improved on the descent through some orchards just outside of Andilla. Rounding the bend, Andilla came into view. As typical with medieval towns, it was wrapped around a hill. The domed ermita topped the hill, and could be seen from a distance. There was also a nice opportunity to see one of the historic cross markers and the old bridge upon entering the vicinity of the town. While the town had excellent period buildings, there was very little happening in town. I waited for an hour until the only cafeteria in town opened, and then had coffee and a sandwich while catching up on news and emails. When the sun was setting, I set off to find a place to camp outside​ of town. I only went about 400 meters before finding a nice spot with a picnic table.

The weather turned a bit at night, and light rain fell on my tent. The rain paused in the morning until after I had packed up and moved on. It was raining for the first two hours of walking, but it was light enough not to need the poncho. The trail started as single-track, and it climbed steadily up to another ermita and fountain that was on the hill high above Andilla. A local crew was working there to reduce vegetation. It’s getting close to fire season, and lately I have seen more local government and forestry department crews working to clear brush. The path continued on a decent dirt road along the ridge and through a saddle before intersecting the GR10 path. The road then dropped down into a winding valley carved by a creek. The creek was dry and the path followed the creek bed. There were rocks everywhere, and much of the time was spent rock-hopping on the big boulders.

Once out of the creek bed, it was single-track that was, for a change, well maintained and not overgrown. The path then switched to a road that wandered through the hills, and passed close to the villages of Arteas de Arriba and Arteas de Abajo before arriving in Bejis via the back​ entrance that curves around the mountain that Bejis is built into. This entrance passes under an old aqueduct, which was nice. Upon arriving, I found that the accommodation where I was planning to stay had just gone out of business, but they had an apartment for rent in town. That was lucky, and it saved me from having to search for other accommodation, which is often scarce in towns like this. There were some thunderstorms in the evening, which kept me from doing a lot of exploring. This day was a bit shorter, but I needed it to help my feet.

It was a long haul from Bejis to Montanejos, with the day taking about nine hours of walking. While the first few hours out of Bejis were not terribly exciting, my spirits were high because the roads and paths were excellent. Of particular note was the stretch along the “Vila Verde” reclaimed rail path that is sort of intended for bicycles. It was nice to have a flat path that passed through old tunnels. The only drawback was that large parts were recessed into the rock, because they used to dig large trenches in order for the train to pass through hills. This limited the views, but still nicely done. I would like to ride a bike on this path.

After leaving the rail trail, the path followed some rough farm and hill roads before it converged with a number of paths, including the Camino Cid. That section of trail was well maintained and well waymarked, and my spirits were still high as that continued into the mountain roads that go to Montan and Montanejos. My spirits were finally brought back to Earth by two trail sections, each about a kilometer in length and in close succession. The first was not really a trail at all, but simply a sign that pointed up the very steep mountain slope. I had to wade through waist deep shrubs, with the only source of guidance being a pole at the top of the slope. This was poor, slow, and somewhat painful. With that behind me, I was feeling tired and hoping that I wouldn’t see any more poor sections. At about that time, I came across the second bad section. This trail was completely covered in fallen trees, and it took forever to navigate them. I scratched myself up and got pine tar all over my pack. 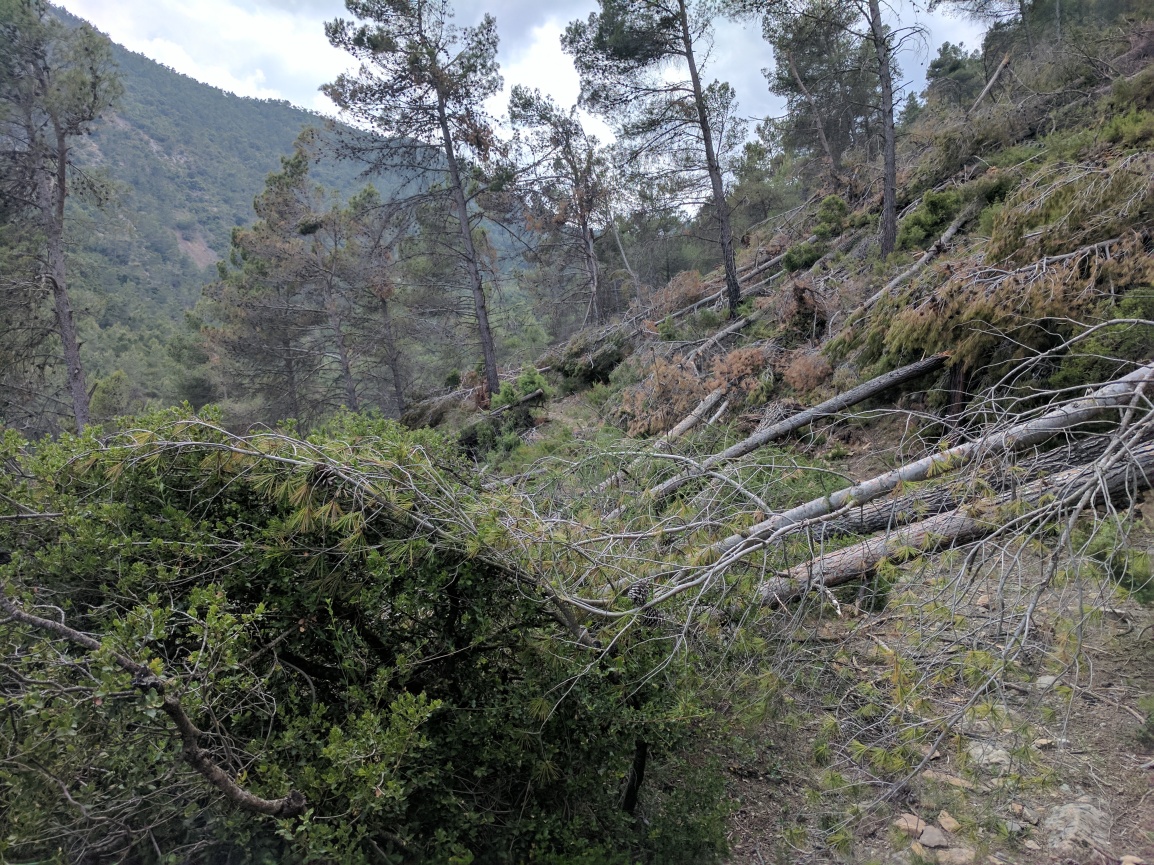 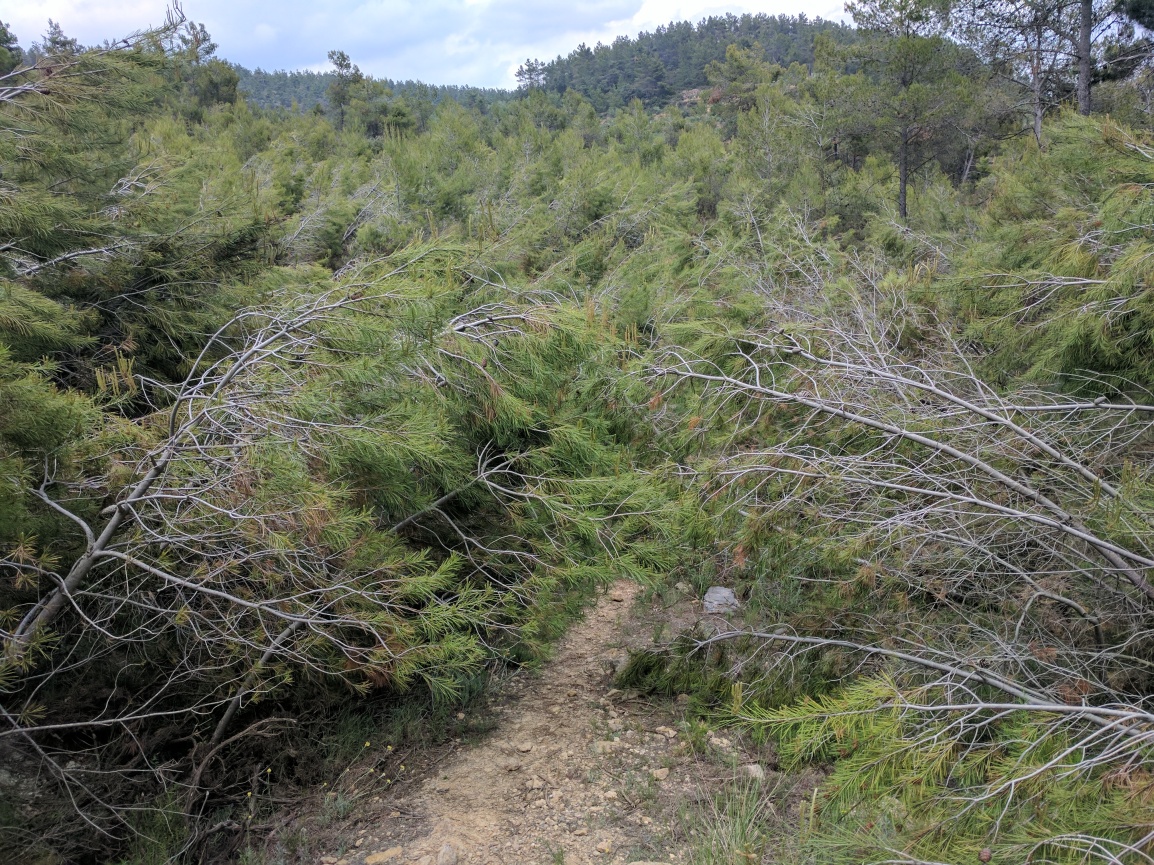 It was hard recovering from that, because it was late in the day. However, the last hour into Montanejos was amazing. There was a huge, deep canyon with vertical rock walls and caves, with the trail clinging to the edge. It was hard not to get vertigo looking down into the canyon. This has got to be one of the most underappreciated rock climbing spots in Europe, if not the world. If you are a rock climber, you would be jumping around like a little kid in a candy store looking into this canyon. 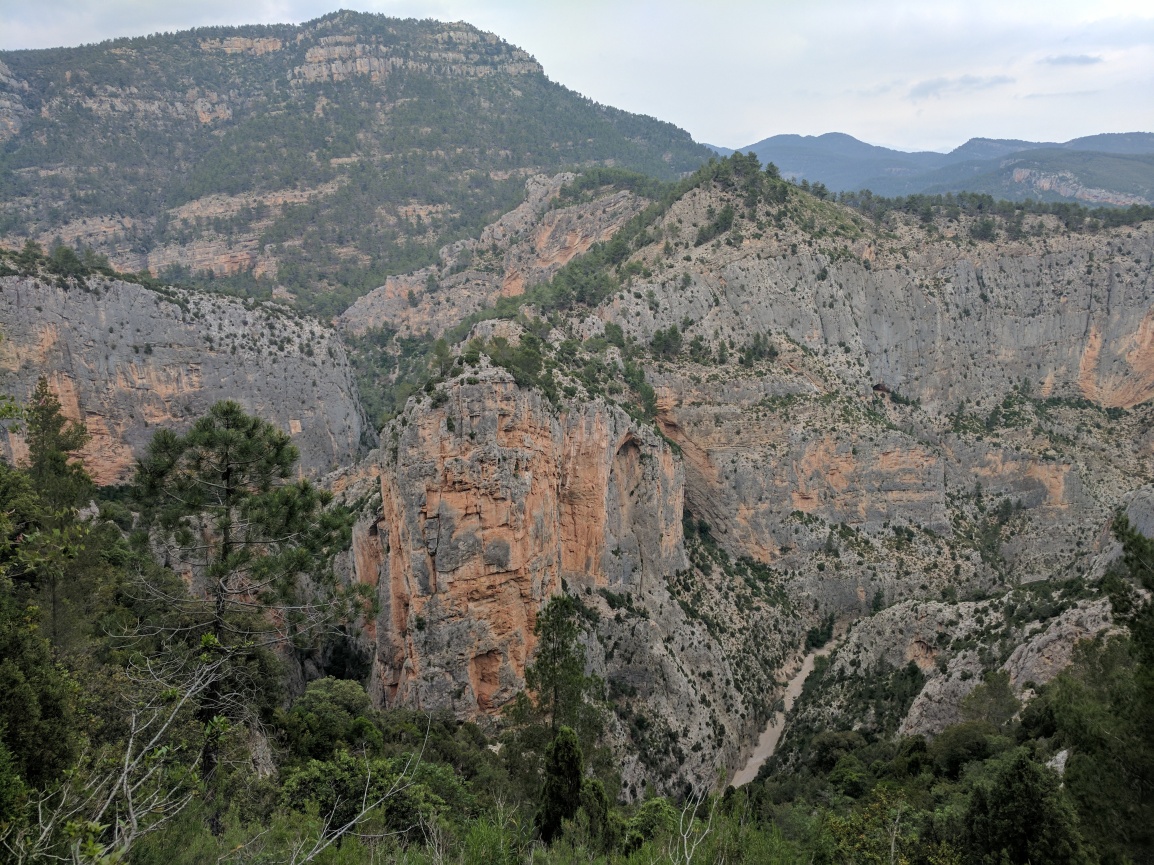 While I did see two rock climbers at a cafe upon my arrival into Montanejos, I was expecting more. The mix of outdoor activities combined with hot springs in the area seems to make Montanejos a bit more lively than most towns. Shortly after arriving, the thunderstorms that seemed to be building all day finally let loose. Took refuge in a cafe filled with locals watching live bullfighting, where one of the toreros was gored in the upper leg, but returned to finish the fight to the delight of the crowd. Bullfighting is still alive and well in Spain despite efforts to curb it. Whether or not you believe that this is animal cruelty does not change the deep-rooted history and passion that people have for it. It’s truly viewed as a form of art, like watching an opera unfold. Asking Spain to give up bullfighting is like asking the Bolshoi to give up ballet. I can’t really see that happening.