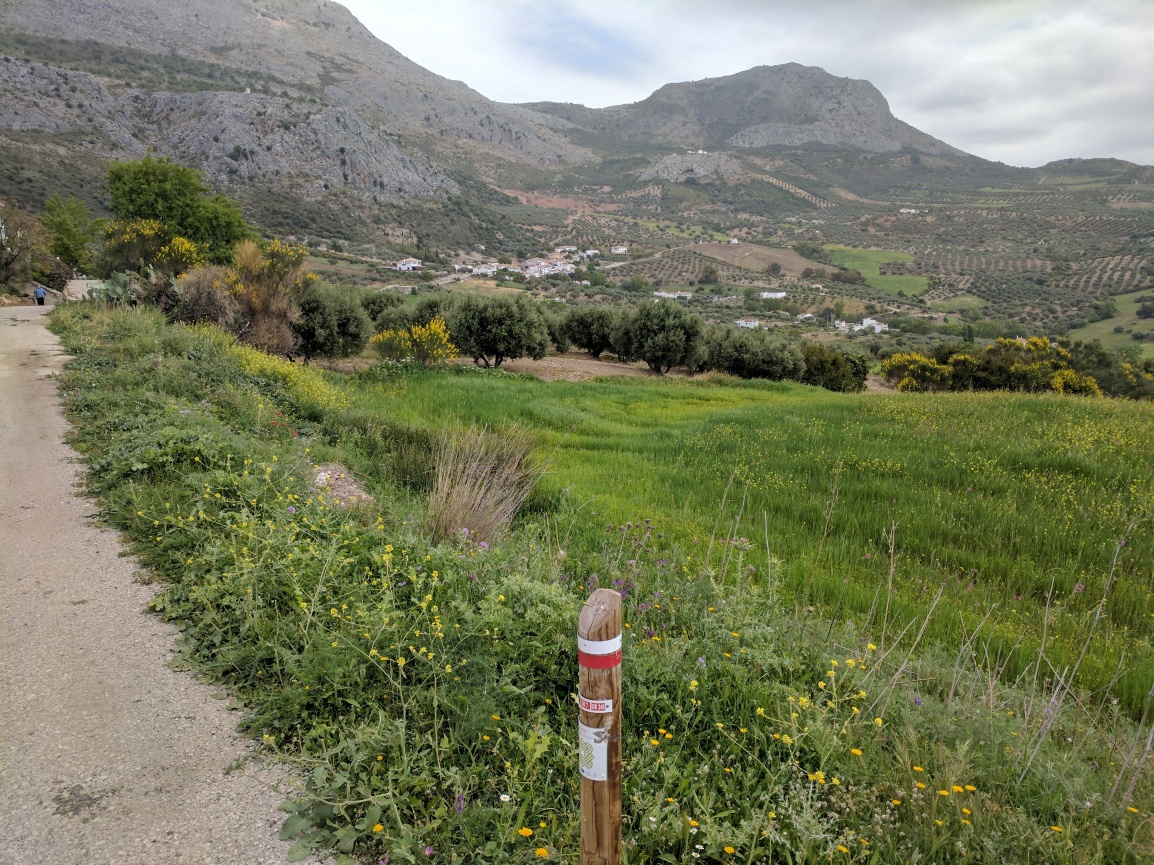 Out of Antequera, the wind was awful for the first 10k. There were times when the gusts may have knocked me over if it were not for my walking poles. Waymarking was non-existent until about 16k into the southern variant. The trail extending from the end of the first side road is no longer there, and I decided to cut through a rough area where the trail was supposed to be, rather than backtrack for 4-5km. I ended up in the middle of someone’s farm and had to cut across their farm and hop a fence to get to the nearest road. Didn’t mean to trespass, but not much I could do. In looking back at the map, I’m not sure where else the path could have gone, other than just following the main road. I finally got back on course, and camped next to the road a few kilometers outside of Alfarnatejo.

In the morning, I took a bit of a detour through the town of Alfarnatejo so that I could refill water and get a coffee. The rest of the day was great walking along the ridgeline with rolling ups and downs through olive groves. The views into the valley below were dramatic. Entry to Ventas de Zafarraya was through narrow gap in a rocky pass, with a tunnel through the rock. Ventas de Zafarraya itself was underwhelming, because it is mainly a service town. Not much going on and no place to stay. Went past to Pilas de Algaida where there was a decent restaurant and cheap pension.

The area around Ventas de Zafarraya and Pilas de Algaida was agricultural, with mostly artichoke and cauliflower farms. The back roads used by the path were quite littered with farm refuse and trash, so it took about 7-8km before leaving that behind. The surrounding hills were nice and green with large sections of pine forest. In some spots people were harvesting the pine tar, which was interesting. The pine forests gave way to lots of olive groves on the last stretch into Arenas del Rey. Despite the less than attractive start, it was an easier day with rolling hills and decent conditions. It is worth noting that the GR7/E4 makes a couple of long loop-backs/detours before reaching Arenas del Rey, which adds a fair number of kilometers to the day. Arenas del Rey is a quiet town, but I was able to find a good Airbnb and a place to have an excellent dinner.