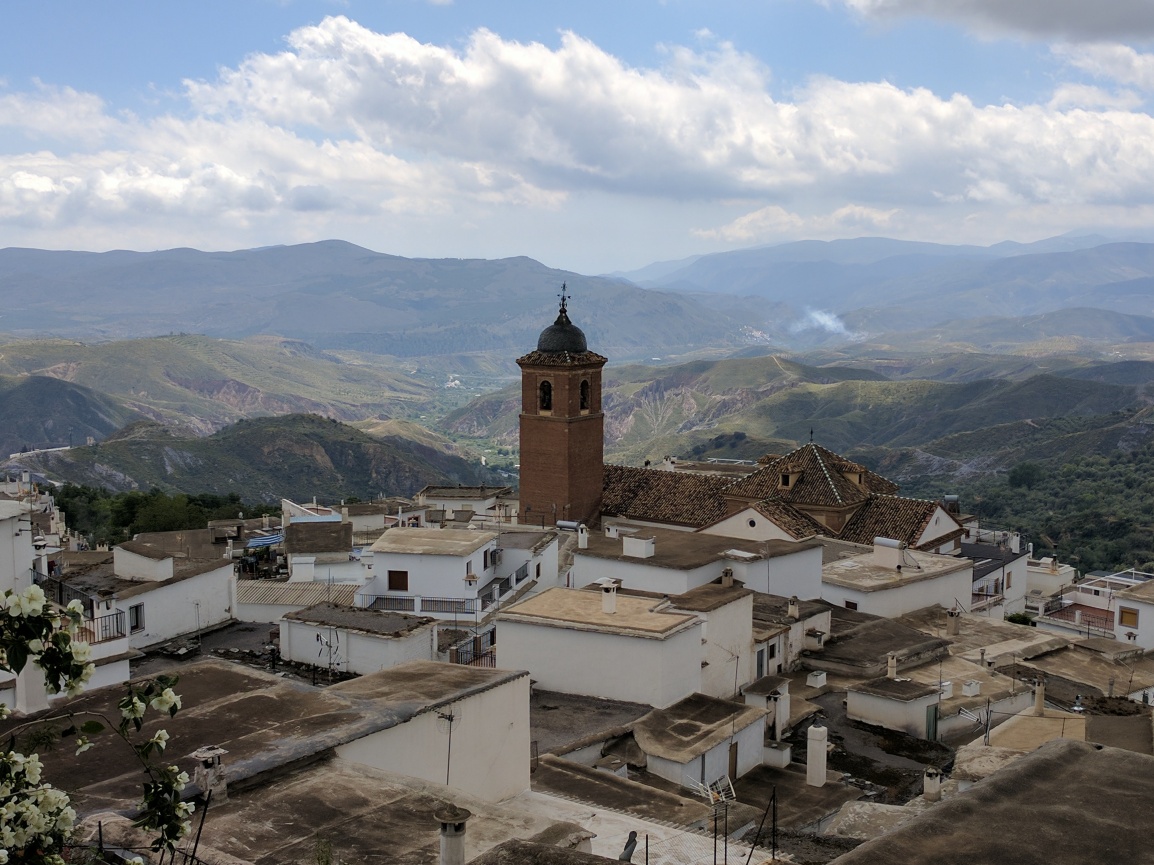 From Canar to Busquistar, it was raining in the morning, but stopped just before I got underway. Much of the trail was single track, and the section going into Pampaneira was somewhat overgrown with grass and thistle. In a few places it was difficult to tell where the trail went. Since it had been raining as well, the overgrowth was very wet, and it was impossible not to get your shoes, socks and pant legs soaking wet. It was difficult not to stop and look around every ten seconds, because the valleys are huge and you feel like a small speck stuck to the side of the valley wall. The climb through Pampaneira and beyond Bubion was quite steep, and I finally welcomed the crest into the next valley where it was easy walking through Pitres and Portugos to Busquistar.

The next day, it started pouring rain about five minutes after starting my walk, and it didn’t let up at all for the entire day. The way from Busquistar to Trevelez was mostly single track trail with some significant climbs. By the time I was half way to Trevelez, the trail was in horrible shape. It was all mud or water streaming downhill towards me on the climbs. The temperature dropped to just above freezing, and it was snowing just a few meters above the track. Needless to say, my shoes, socks, and pant legs were soaked by rain and trail water, and my shirt was soaked with sweat from the climbs. It was quite a battle just to get to Trevelez. Lesson learned from the morning, I decided to walk the road out of the valley to Juviles instead of the actual GR7 trail that parallels the road, knowing the trail would be in terrible condition. That added a couple of kilometers to the day, but worth the detour in my mind. Overall, this was a very challenging day, and I was really questioning whether I should have left Busquistar.

In Juviles the following day, the weather gods were still in a bad mood. It wasn’t pouring rain, but very heavy drizzle and fog. The drizzle continued until the last hour into Yegen, and for most of the day I couldn’t see more than a hundred meters in any direction. The trail and dirt roads were still waterlogged from the day before, and the heavy drizzle made conditions poor. Lots of slippery mud, and my feet were again wet for a good portion of the day. My feet were not happy, and I could feel some blisters developing. Yegen was a lot quieter than I expected, and I was not able to find an open food store to prepare for the extended holiday weekend.

Although still a bit chilly, I awoke to sunny skies in Juviles (woohoo!). The trails were still soft from the previous two days of rain, but was just happy to be walking without freezing and without a poncho. There were great views into the valley below, and I was able to stop in Valor for a nice breakfast, despite the fact it was Sunday. There was a small celebration going on in Laroles, with men and women in traditional dress, and some of the men had brought their horses into town as well.

Laroles is the jumping off point for making the cut through the Sierra Nevada National Park to La Calahorra on the northern side, which is my next stop tomorrow.